There is a lot of things to check out while visiting downtown L.A. for the first time. One should definitely see Olvera Street, the Fashion District, the City Hall, or one of the neighborhoods like Chinatown or Little Tokyo.
Alternatively, one can just disregard all this and walk around aimlessly until one finds something really interesting.

In exactly this way I stumbled upon The Last Bookstore.

Well, technically it is not the last one there, and it never has been – among others, there is The Caravan Book Store, which has been around for over 50 years. However, while bookstores tend to be pretty much the same in every city and may not usually be a tourist destination, The Last Bookstore is definitely an exception to this and something you should check out even if you’re just visiting.

The ground floor is filled with mostly new and some used books. You can find there volumes on everything from ancient history through fashion to cooking and architecture. There are many places to sit and skim the books before you decide to buy them (take that, Internet). Add the music that’s always in the background and you have a great place to spend an entire afternoon lurking between the shelves.

But as if that wasn’t enough, the real fun begins on the second floor where you can find the so-called Labyrinth.

Inside there are huge sections on science fiction and fantasy, mysteries, thrillers, and horrors. There are classic books (like those by J.R.R. Tolkien or Agatha Christie) as well as ones that probably were pronounced a failure even before they left the press. I honestly believe that one can find the book of their dreams there. Have you ever wanted to read a 19th-century-based, escaping-the-Spanish-inquisition-like story about dragon breeders having to steal ancient magic powers in their endeavor to save the world which is only possible by tracing down a baby unicorn sent from the future? Yes, it’s there.

Even with all that, my favorite part of the store begins further into the Labyrinth – it’s The $1 Book Room, filled with 100,000 books no one really considers worthy. There is literally everything from cheap romance to crappy crime to outdated politics to primitive art to self-help to games to saving the environment to cha-cha. The room is divided into themed sections so that one may have some sense of direction, but in reality one just goes around searching for anything that is worth paying for. If you ever dreamed of hunting treasures – this is one of many incarnations of this dream.

You can find wonderful curiosities there. The Official Guide to American Historic Inns, Cadillac Jukebox, Thanksgiving: The True Story, The Ukrainians in Manitoba, Man’s Rise to Civilization as Shown by the Indians of North America from Primeval Times to the Coming of the Industrial State, Retirement Places Rated, What Washington Can Learn from the World of Games – that’s just a few of 100,000 titles.
(What was I thinking. I should totally have bought the Cadillac Jukebox.)
The fun just never ends!

You can enlarge this one. Just take a look at all this useless stuff.

You can even spot general directions on where to find distant lands. It’s either that, or it’s pointing to a section on Europe. I choose the former.

I think that the best thing one can do in such a peculiar wonderland is to either search for the weirdest book out there (think about all the fun after yet another glass of wine), or to search for a book with lots of pictures (always a good thing). I have gone against this rule once and ended with Trading Up by Candace Bushnell. After reading the first few pages (my, was that hard) I am convinced that the success of Sex and the City has to be wholly acknowledged to the people working at the show.

I was looking through these two at The Counter, which claims to be the best place serving custom built burgers in Los Angeles. It was OK, but I’d vote for Five Guys over this anytime.

Rolling Rivers is a piece containing descriptions of the most significant rivers in the United States. You can learn about some geographic facts, all the historic background and the development of business and society in the vicinity throughout the years. I couldn’t believe someone had paid for this to be printed, and therefore I just had to have it!

Spirit is interesting because of all its pictures, although the captions can be cherished too. One of many that would be worth your attention could be put shortly as “somewhere in the world there is a great picture of this man throwing a head loop; here’s one with the family”.
All jokes aside though, one can really appreciate the photographs of American West. 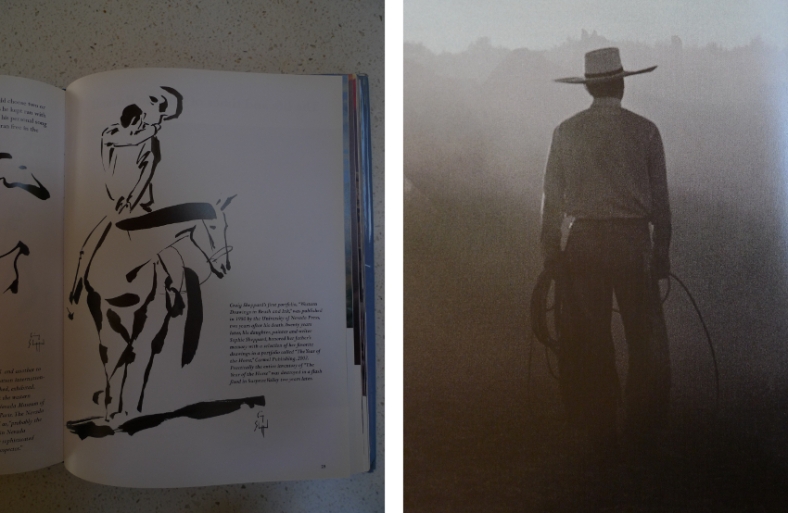 Given all that, I think we can all agree: The Last Bookstore is utterly cool. Like cowboys. Or horses. Or rivers for that matter. I am definitely coming back.
(No, really. How could I miss out on Cadillac Jukebox.)

3 thoughts on “The Last Bookstore in Downtown L.A.”